Conservation collaboration in the Overberg

Spanning 1,2 million hectares, the Western Cape’s Overberg is home to the Agulhas Biodiversity Initiative (ABI), which involves private landowners and farmers partnering with government and non-profit organisations in a multisector conservation drive. In addition to undertaking sustainable farming and fynbos harvesting, they conserve water, protect the natural environment, grow green jobs and create corridors for the movement of wildlife. 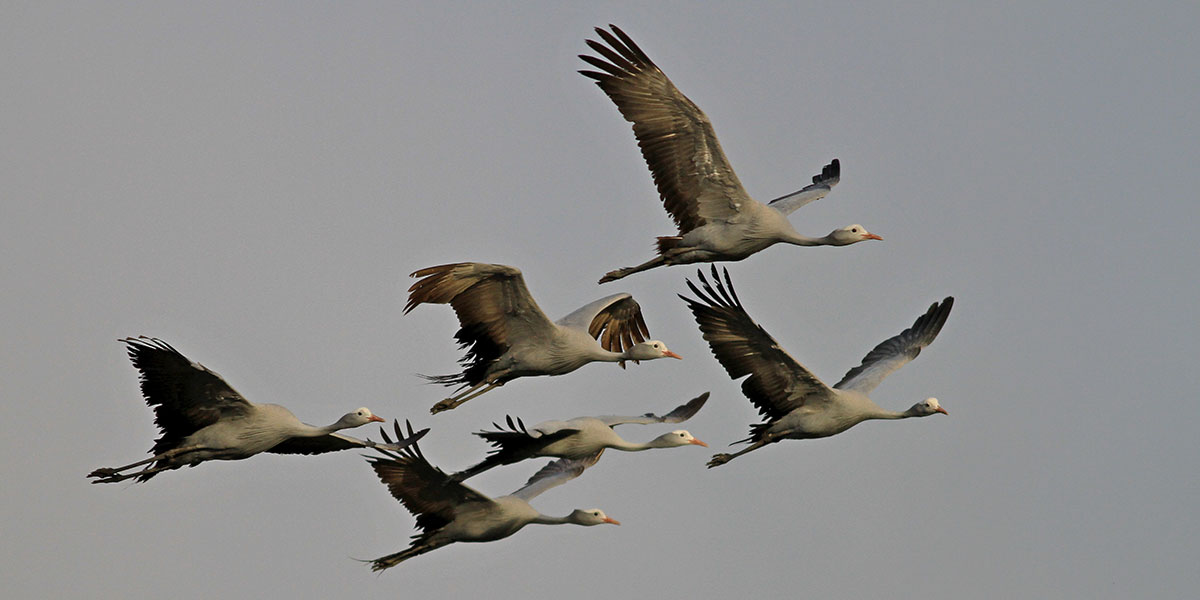 ABI was established 15 years ago and now has close to 50 organisations as members.

In 2020 the WWF Nedbank Green Trust came on board to fund ABI’s planning for the next 10 years, including several large landscape issues that will be managed in an integrated way through key projects. One of the projects is a water fund for the Overberg that aims to increase long-term water sustainability at all levels. For this project ABI is partnering with The Nature Conservancy (a global environment non-profit organisation) and using learnings from the Greater Cape Town Water Fund. 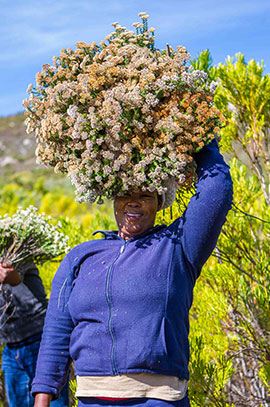 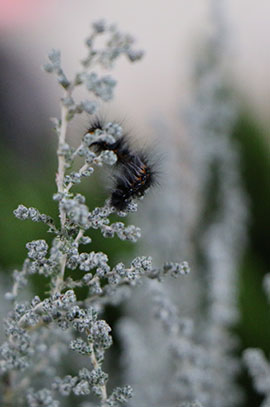 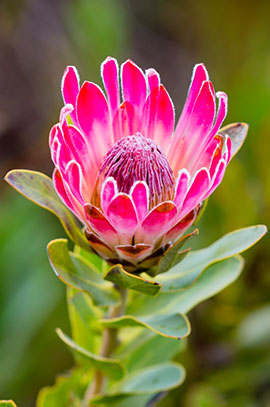 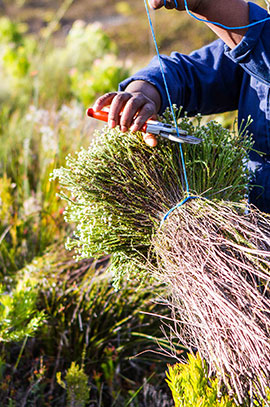 ‘Next to agriculture, wild-fynbos harvesting is the second-biggest employer in rural Overberg and, together with the harvesters, we have established a framework for a value chain of socially and environmentally sustainable harvesting that the mainly international markets require,’ says Richardson.

She explains that ABI has made considerable inroads over the past 15 years in its efforts to:

‘It’s a very exciting initiative as it takes cross-sectoral collaboration to the scale required to manage large landscapes and partnerships collectively. This is what is required for sustainable land management in South Africa going forward,’ says WWF SA’s Land Programme Manager, Jan Coetzee. ‘The WWF Nedbank Green Trust funding has come at just the right time to take ABI to the next level.’

Another major landowner programme is the Greater Overberg Fire Protection Association (goFPA), established in 2015. ‘Its aim is to support landowners to work together to manage and control wildfires cost-effectively,’ Richardson explains. ‘Approximately 60% of the ±800 landowners in the Overberg have joined the goFPA and the aim is to increase this. Many are also working to reduce the fuel load through clearing alien invasives.’

A further project in the 2020–2030 phase is to upscale the removal and management of invasive alien vegetation. Flower Valley’s natural resource management programme manager Kirsten Watson explains: ‘Flower Valley Conservation Trust is the implementing entity for the ABI Alien Clearing Project and has been working with nine land user groups since 2013 towards the control of alien species. As a collective, we have cleared 44 706 ha of alien species and provided employment for 12 contracting teams from rural and semi-rural communities. This scale of success is possible only through partnerships like ABI.’

ABI green economy theme leader, Carla Ackerman, says: ‘Important working partnerships have been established to use the alien biomass, in particular a pelletmanufacturing
initiative with Ekasi Energy and Fynbos Logging, a member of
ABI.

This project is already turning into an opportunity for wider initiatives and is in discussions about the potential for using the alien biomass for aviation fuel with roleplayers such as WWF and the Roundtable on Sustainable Biomaterials (RSB). RSB is a global organisation that brings certification, business tools and solutions to the new world bio-economy.’

This has to be done at scale to be viable. It is a massive green project with considerable employment potential, but it is not easy to remove alien invasive vegetation in this very mountainous terrain.

ABI’s future plans will need to bring together social, cultural, political, economic and environmental needs and opportunities. Media and communication and environmental education campaigns will be key. ABI is looking at scaling up its two decades of work in early-childhood development as one of many long-term initiatives required to break the cycle of poverty in the Overberg, where unemployment prior to Covid-19 was already at 14%.

One of ABI’s close partnerships is with SANParks, which had wanted to increase the boundary of the Agulhas National Park (ANP) to conserve the vulnerable lowland
fynbos.

It was simply not viable for SANParks to keep buying up land, and neighbouring landowners who have been farming there for a considerable period of time ─ some for 200 years ─ had already started their own conservation activities.

Together with SANParks and other ABI partners the decision was taken to partner in conserving and managing the land in a collaborative, landscape way.

This led to the formation of the Nuwejaars Wetlands Special Management Area (NWSMA), which over the years expanded to include 46 000 ha of privately owned land that now forms the northern boundary of the ANP. It includes the Nuwejaars wetlands and extends all the way to the Napier-Bredasdorp Mountains, creating wildlife corridors between the coast and the mountains. The NWSMA and the ANP are situated within the BirdLife SA Agulhas Plain-Heuningnes Estuary Important Bird and Biodiversity Area and provide sustenance and refuge for the large numbers of birds and mammals that use this habitat.

One of the driving forces in the NWSMA and ABI, Mick D’Alton, who has a farm in the NWSMA, says: ‘The Nuwejaars River and associated wetlands play a significant role in supplementing the underground water systems that feed Struisbaai and Agulhas and flow into the De Mond estuary, which is an international Ramsar site.

The wetlands provide a large number of ecosystem services in the form of carbon storing, water purifying and flow control.’

He explains the importance of ABI: ‘Because of the changing weather patterns and economic climate, many landowners across the Overberg were overharvesting the fynbos and overutilising their natural areas, resulting in degradation. Those who
were trying to practise good natural resource management were doing it in all sorts of ways, depending on budgets and priorities. This resulted in a very fragmented and unsatisfactory situation, with the different systems stopping at cadastral borders.’

He says the establishment of ABI and the process to ensure its continuation for the next 10 years is the best possible solution. Through this, the members can collaborate on projects at scale in a strategic manner, and have a far better vehicle for raising funds and support than if they try to go it alone.

The revisioning process is being funded by the WWF Nedbank Green Trust between 2020 and 2021.